Samsung Electronics is one of the top rated Smartphone manufacturers in the world. The company has recently announced about the Samsung Galaxy Note 4 which may be another top rated Android phablet smartphone in the market. They have unveiled it during a Samsung press conference at IFA Berlin about Galaxy Note 4 and they also hoped that it will be slated for global sales in October 2014. The Note series is where Samsung always has looked to put more focus, and it has been only this company’s reign in the Phablet segment, ever since the Samsung Galaxy Note was launched, in 2011. The Samsung Galaxy Note 4 is announced alongside the Note Edge, the fist device to have a curved screen on one side. 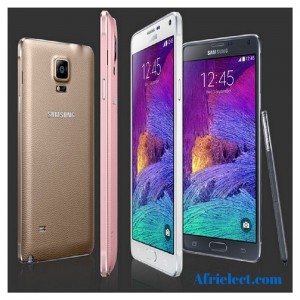 Samsung’s ultimate best series, the Galaxy Note lineup has always held an edge over any other phablet series in the market, thanks to the brilliant specs alongside the software which makes the user interface better for the usage along with the S Pen, an accessory that comes along with the device. Samsung is going to launch the Samsung Galaxy Note 4 this year, in the third quarter and the expected release date for it is – IFA 2014 where Samsung would be holding an event to announce the next best Note device. It has been a trend from Samsung to launch the flagship smartphone in the first half of the year, and keep the sales booming with the Note series in the second half.

You Can Read Samsung Galaxy S7 Specifications, Features And Price

Though the word has it that the screen size of the new Samsung Galaxy Note 4 would be the same, 5.7-inch as in the Note 3, but Samsung is packing in a lot more pixels, to bring out the device with the 2560 x 1440 pixel Quad HD display. The resolution is almost confirmed, because SM-N910A, a model in Samsung’s website had details about the display, and Zauba, a website that tracks the imports and exports of goods, also listed the same model number with the similar resolution and screen size. It is fair to assume that if not the 5.7-inch display, Samsung might be keeping it under the 6-inch mark for now.

As for the other important details of the Samsung Galaxy Note 4, it is expected to carry a 16-megapixel rear camera along with the Optical Image Stabilization, and the features which the Galaxy S5 had – even including the 4K video recording. Although not confirmed, there is a word that Samsung is considering the inclusion of a UV sensor in the Galaxy Note 4, for two purposes – better adjustment of brightness according to the surrounding conditions, and for easy transmission of data from the wearable devices to track the fitness, sleep and other data.

The final rumor for now is that the Samsung Galaxy Note 4 will have two variants based on the external hardware – one with the flat display, and other with the curved display and the curved body, just like the Galaxy Round. It is unclear whether we might be seeing the S5-special features such as Finger scanner and Heart Rate Sensor.

Apple’s iPhone 6 and iPhone 6 Plus For Young Generation

We will be happy to hear your thoughts

USSD To Link BVN to GTBank Yourself